Take a walk through Johnny’s career with some career highlight pics, and simply pics from the road or the stage.  Fans– feel free to send any good pics to rjohnnyband.com for gallery consideration. 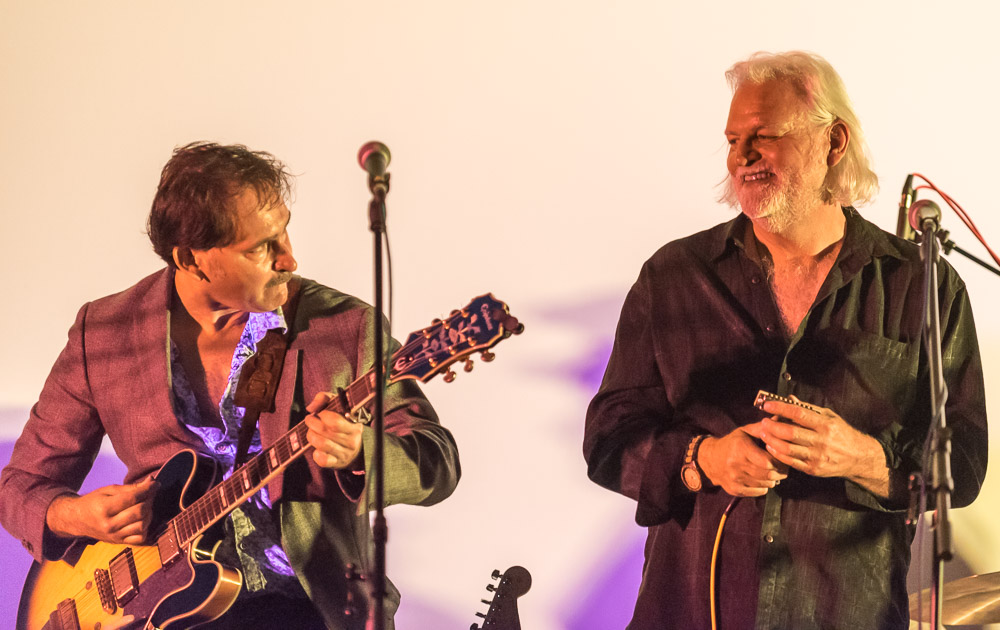 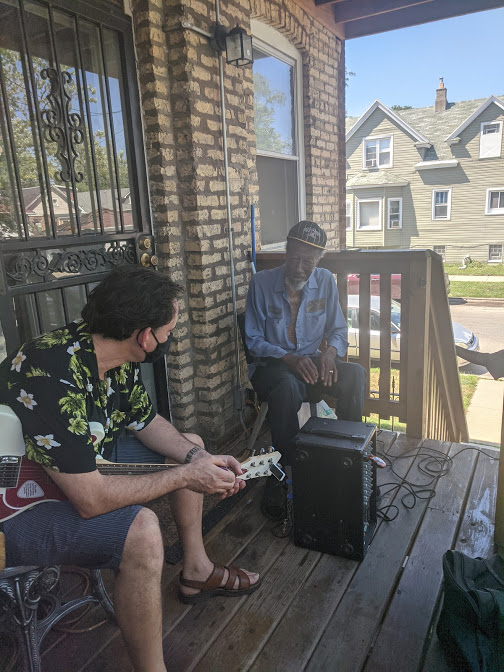 On my birthday in July of 2020 I stopped by Tail Dragger's porch on the West Side of Chicago to play some blues and catch up. I've known him for thirty years! The guitar was a "VW"; which came with the purchase of an actual VW and Tail Dragger bought it from a neighbor. The music from that afternoon is on my youtube channel. 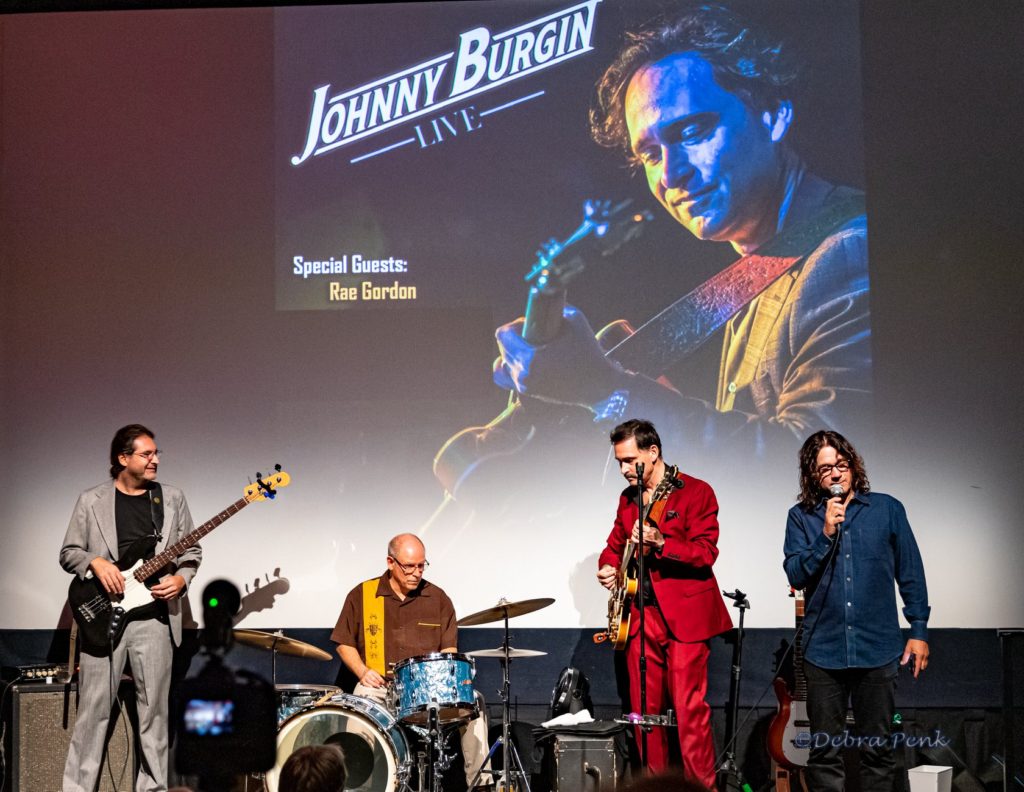 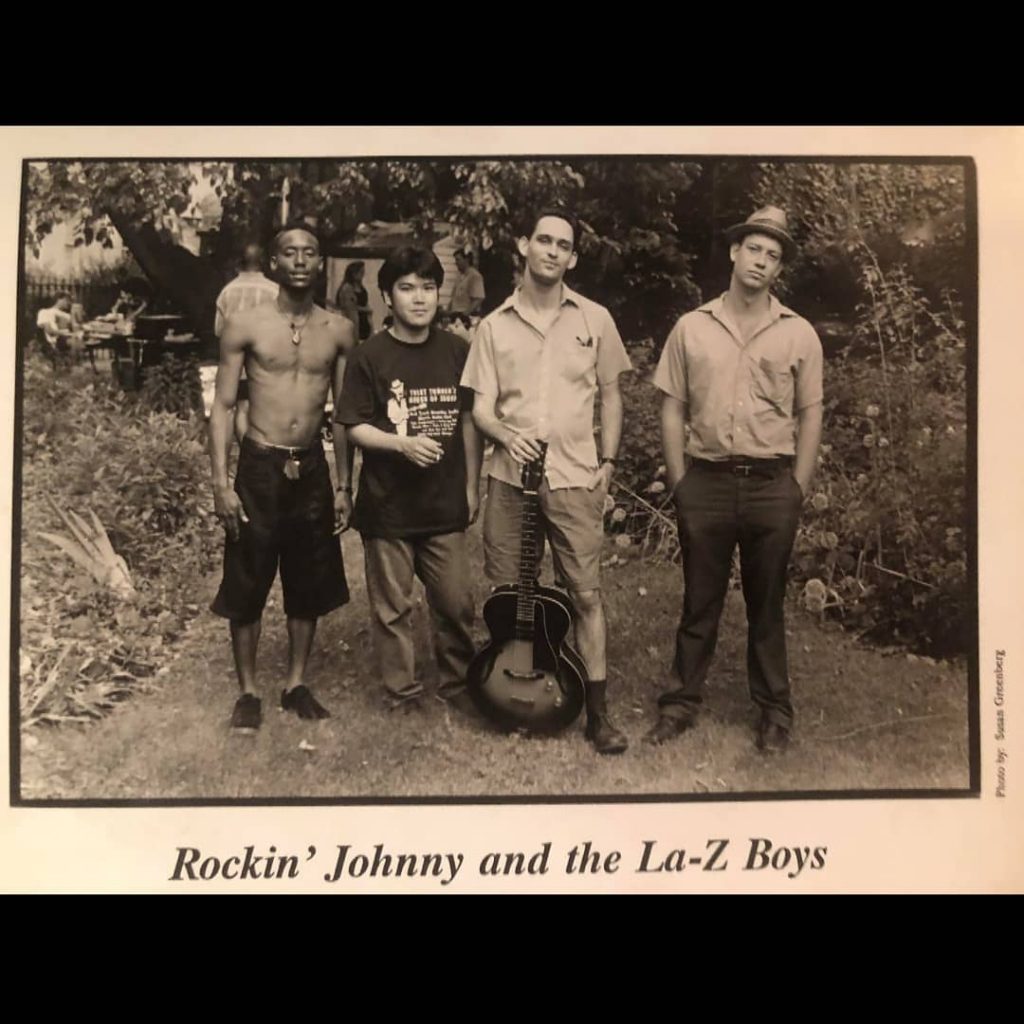 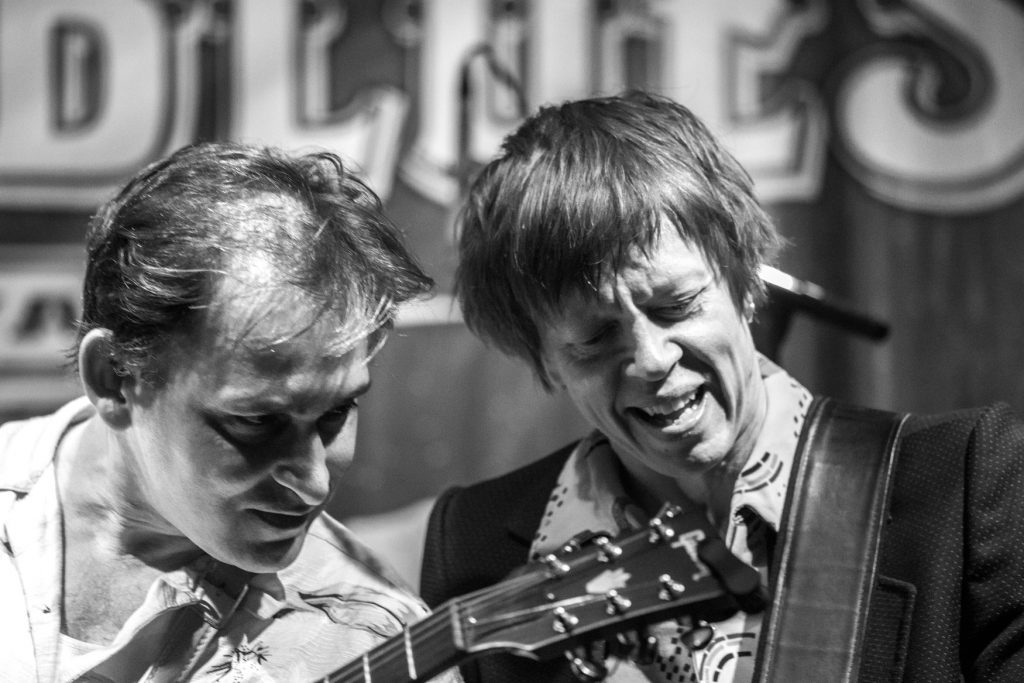 Playing the Lahti Blues Festival, 2018, Finland, with one of my favorite bassists Jaska Prepula. 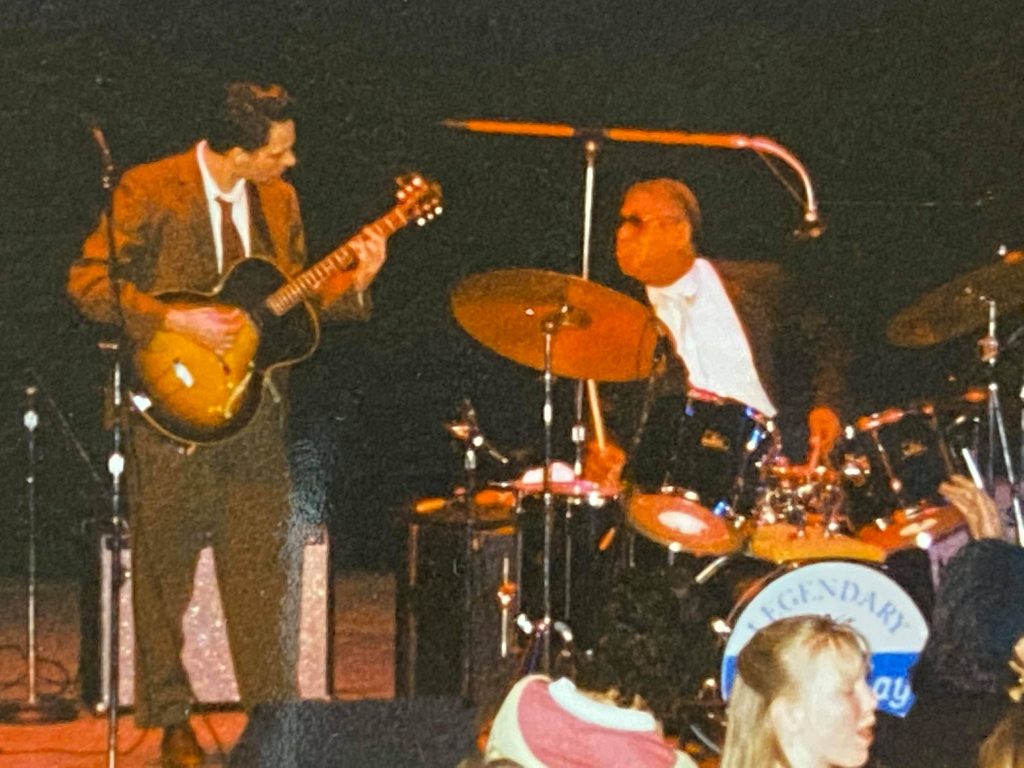 Around 94, on the road with Sam Lay, "the shuffle master", known for his work with Paul Butterfield, Howlin' Wolf, and Bob Dylan. Touring across country with him was an invaluable and unforgettable eperience. 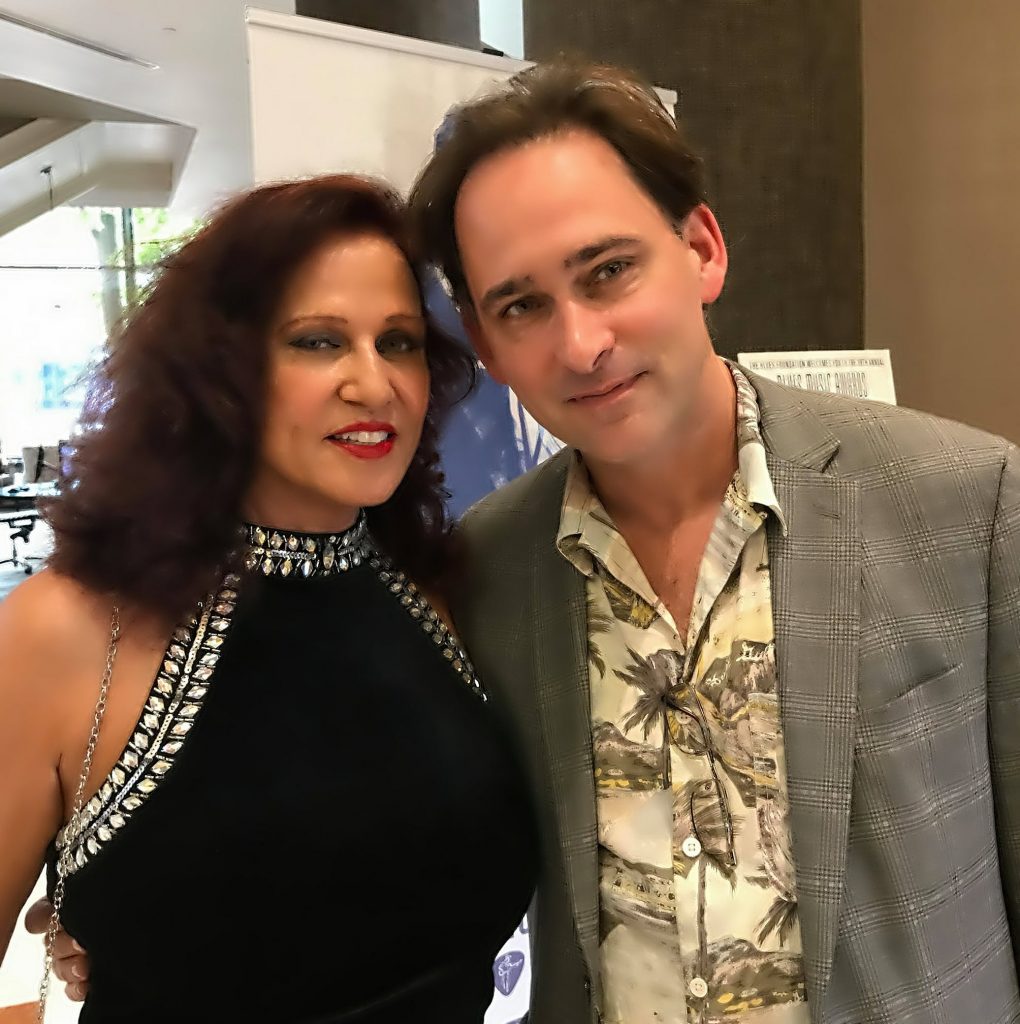 May 2018: Producer Stephanie Tice and myself at the BMAs in Memphis, the "Howlin' at Greaseland" Howlin' Wolf Tribute was up for Best Tradional Blues CD. 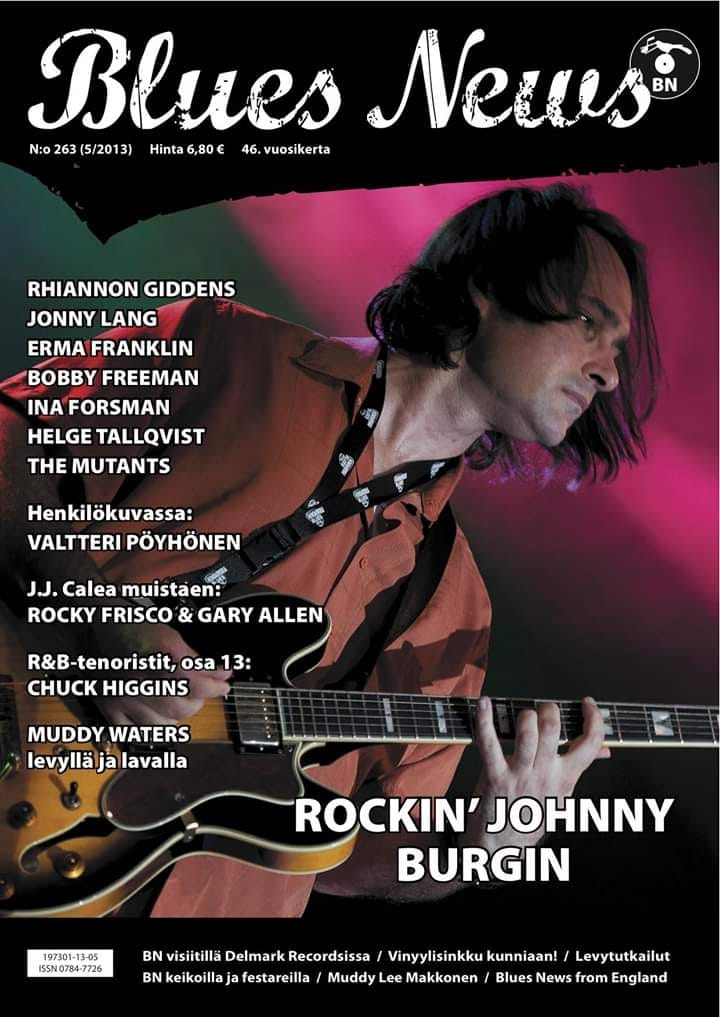 Cover of "Blues News" magazine from Finland in 2013, taken at Hondarribia, Spain from an all star set with Zora Young, Tail Dragger, Eddie Shaw, Johnny Iguana and Kenny Smith. 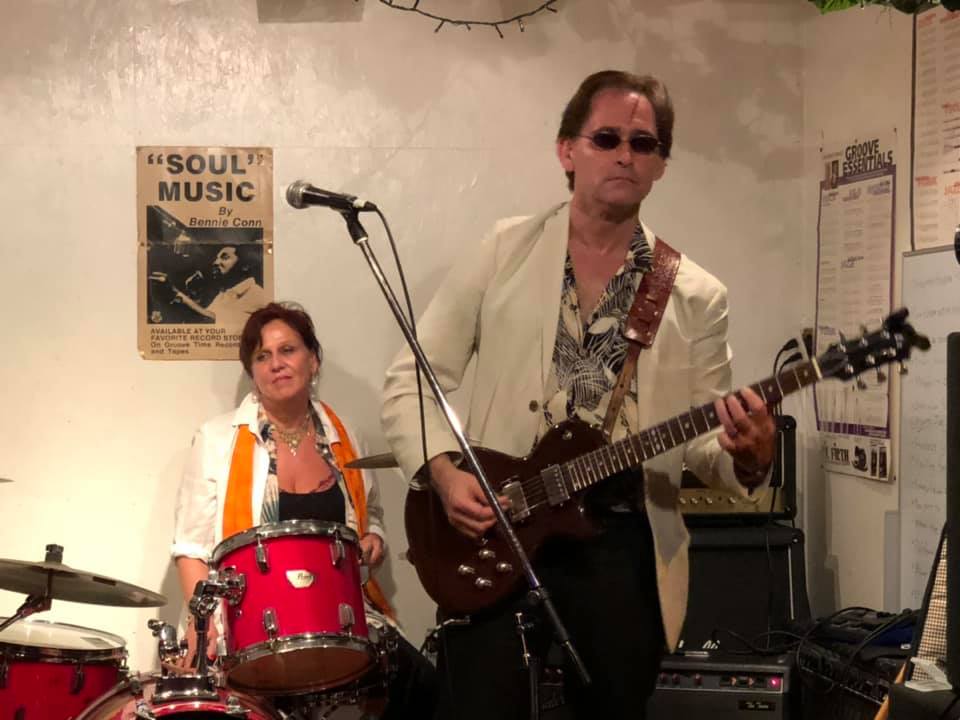 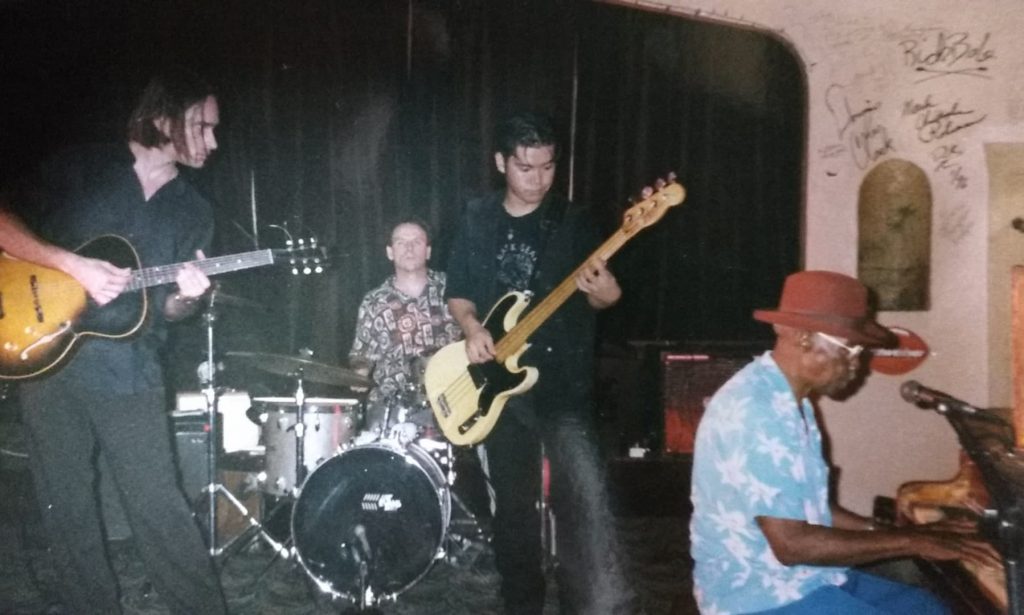 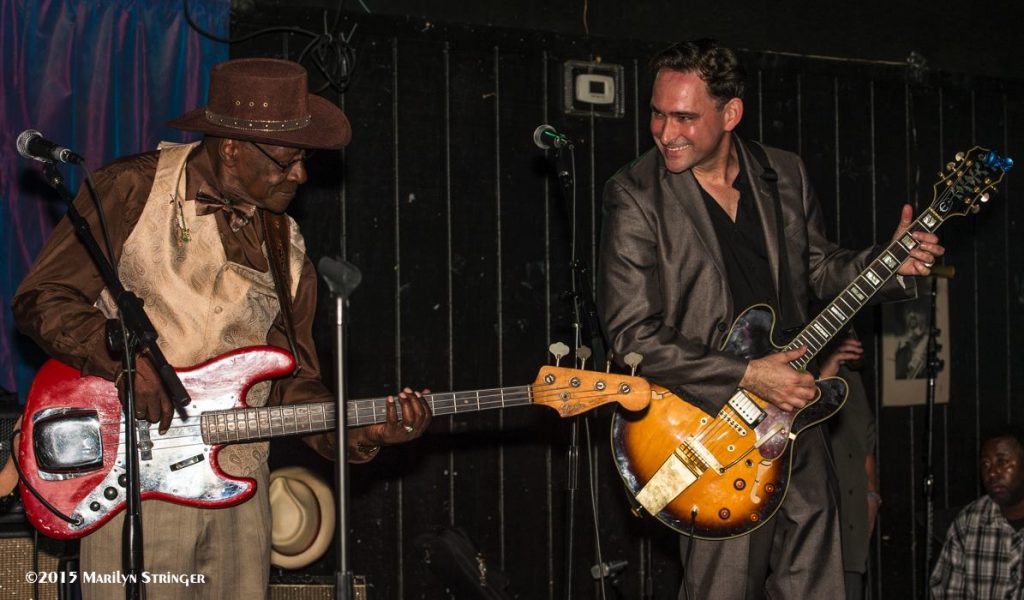 Great times in 2015 with bass legend Bob Stroger at the Rhythm Room, Phoneix, AZ, with Eddie Taylor Jr waiting in the wings. 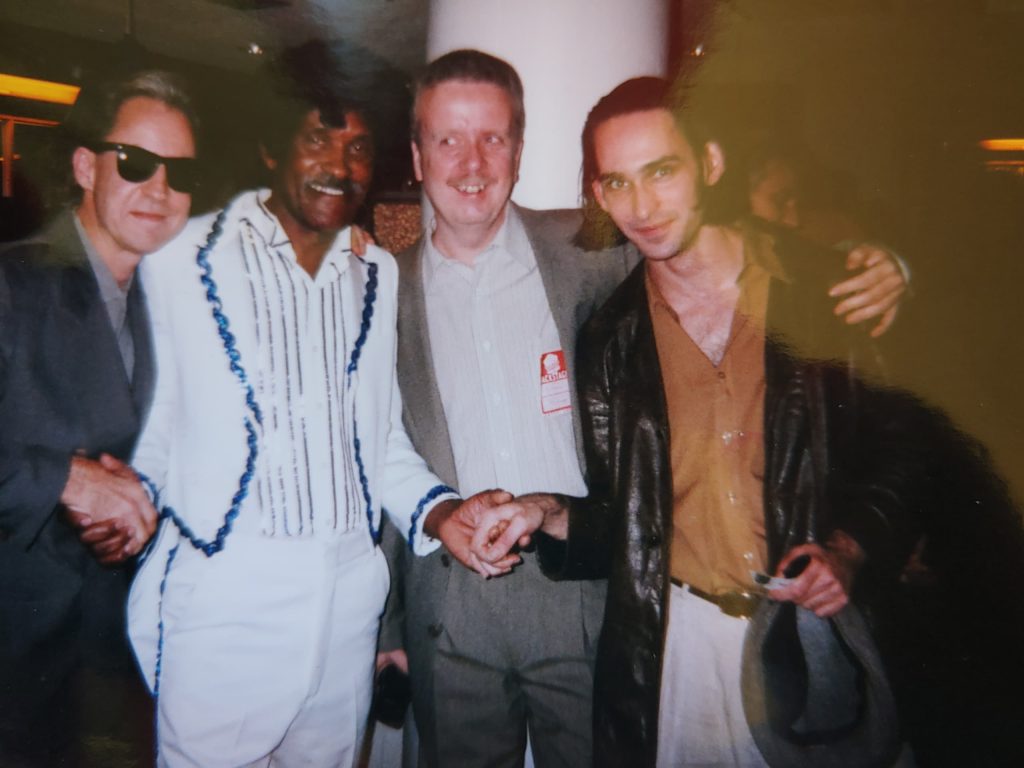 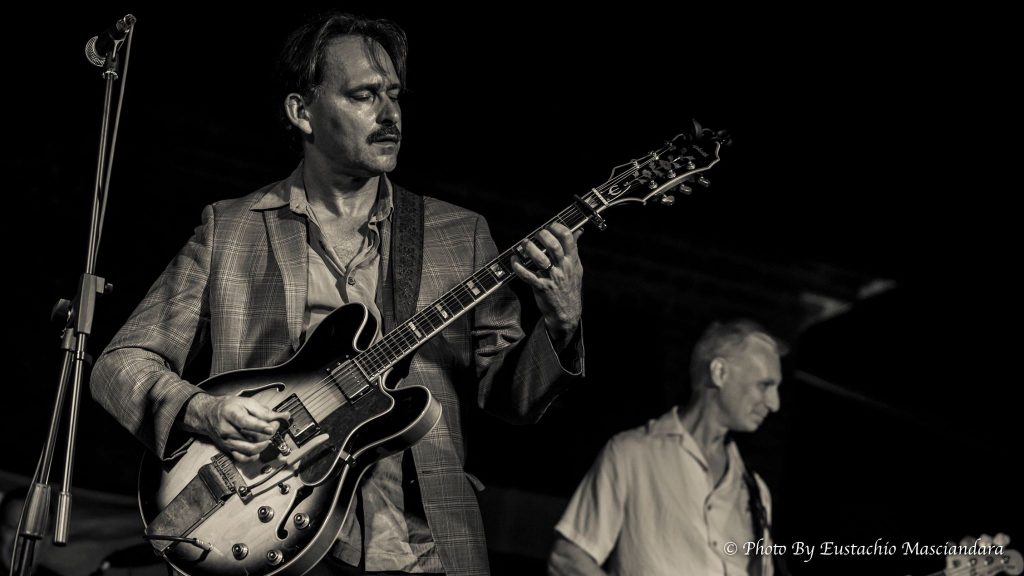 Aug, 2019: Great times on tour in Italy at the Vinovo Blues Festival outside of Torino with Gianluca Martini on bass. 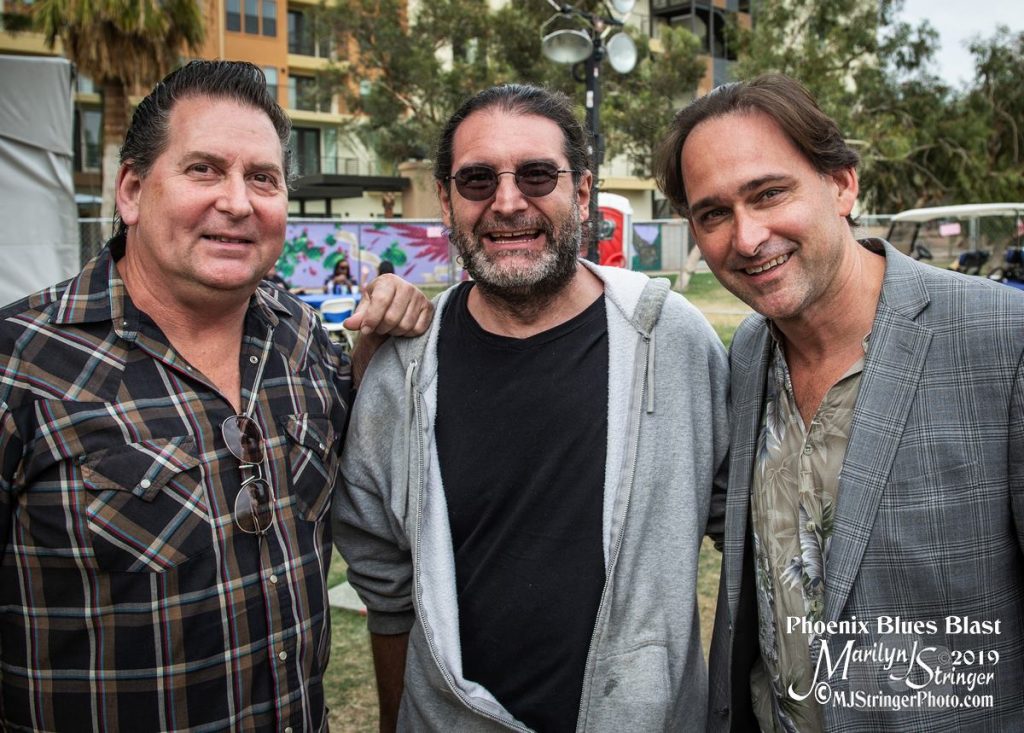 March 2019: Bassist Chris Matheos and I had a great time in Phoenix catching the Paladin's set and hanging a bit with guitarist/singer Dave Gonzalez. We played the Blues Blast After Party, the Paladins were the headliners. 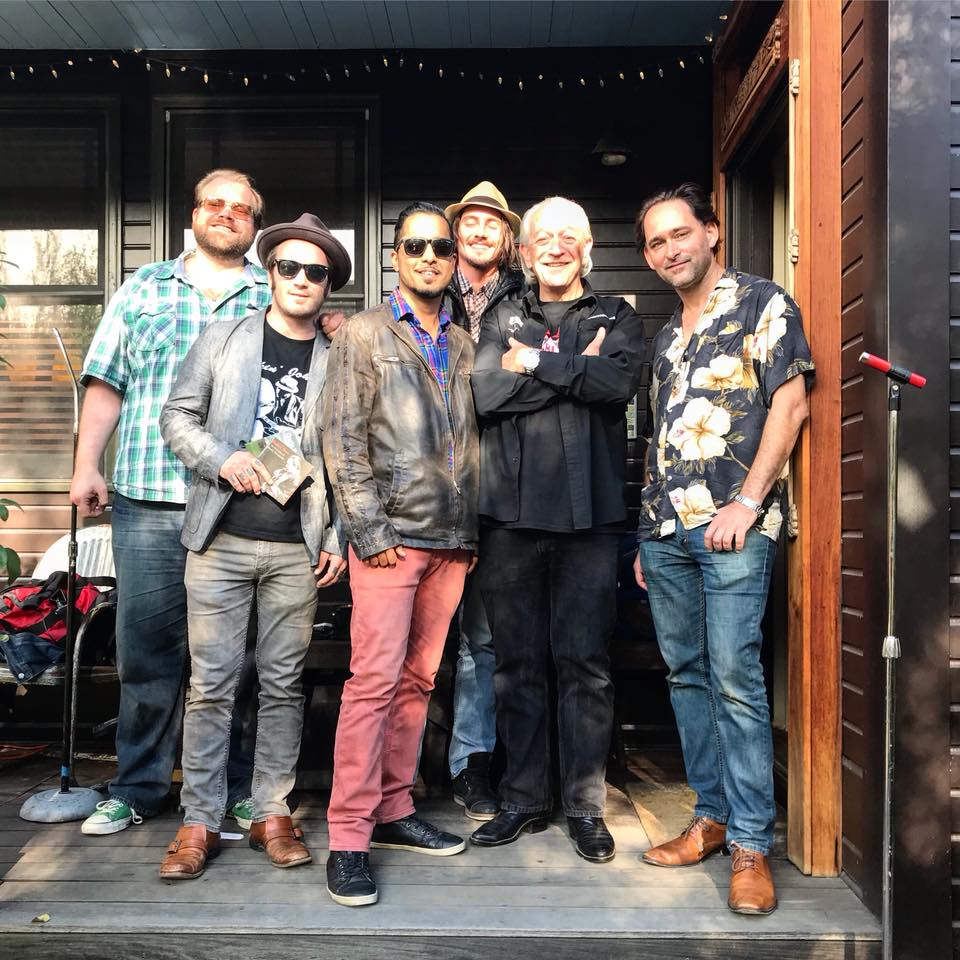 Feeling it in Lucerne, Switzerland. It's one of the best blues festivals in Europe. It was great to go there-- great times not just playing but hanging with old and new friends such as RJ Mischo and his band, Curtis Salgado, Barrance Whitfield and many others. 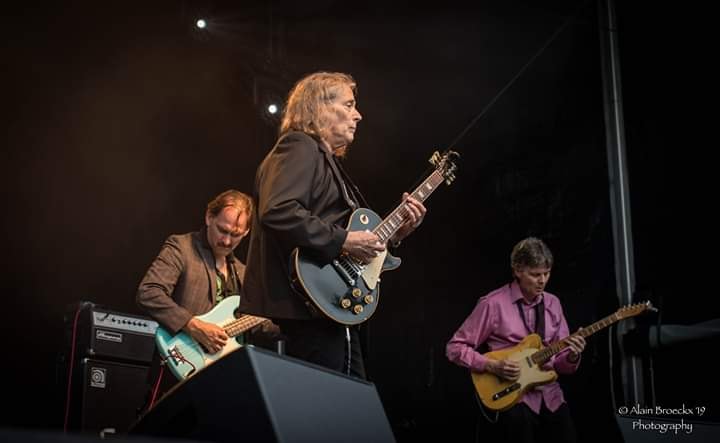 AUG 2019: Swing Wespelaar, Belgium. I filled in on bass for one of my heroes on guitar, NYC-based and Black Top recording artist Bobby Radcliff. Jonne Kulluvaara on rhythm guitar. 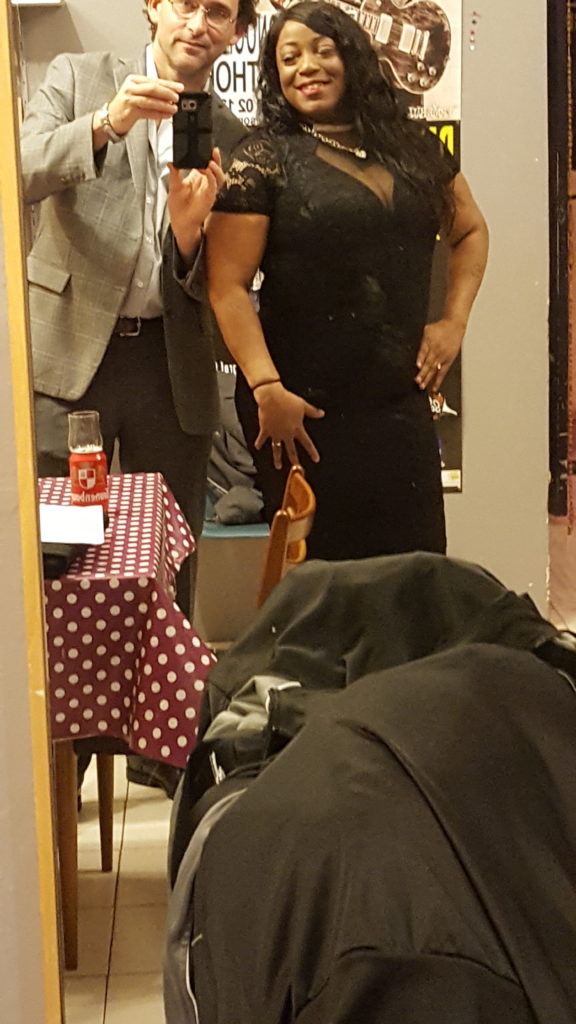 MARCH 2017, FRANCE: Backstage with Demetria Taylor on a short tour of France we did. I met her at the Delta Fish Market back in 92! I love her ferocity onstage. 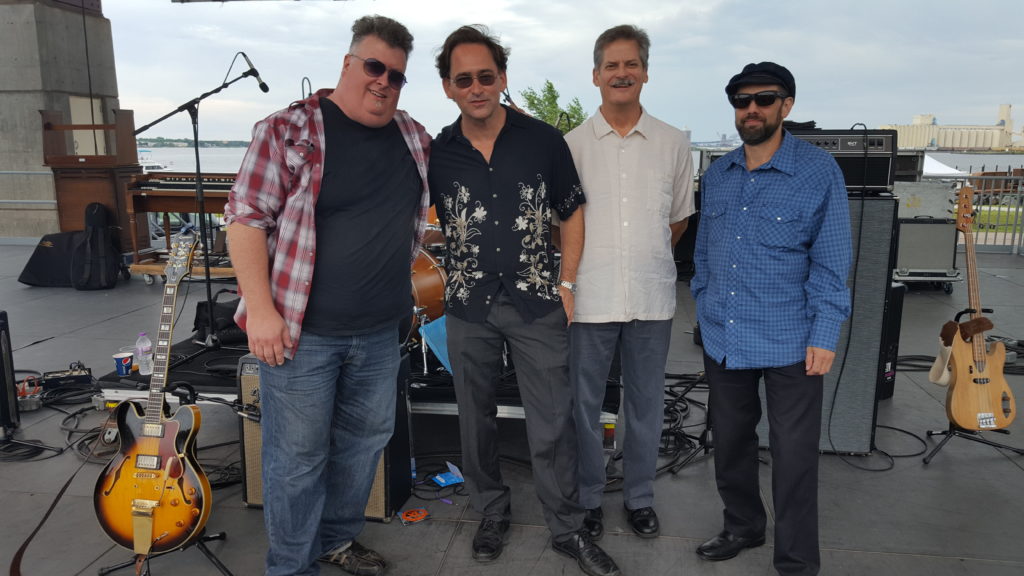 AUG 2017, DULUTH MN: Guitarist extraordinaire Jeremy Johnson (left) and bassist Dave Wood joined me at the Bayfront Blues Festival, one of my favorite blues festivals in the US.

My two trusty work guitars: a 61 Rickenbacker, just like my first guitar which was stolen, and my trusty 90s Korean Epiphone Sheraton II custom fitted with the vibrola bar. Photo by Jeff Griffin, Greenwood, NC. 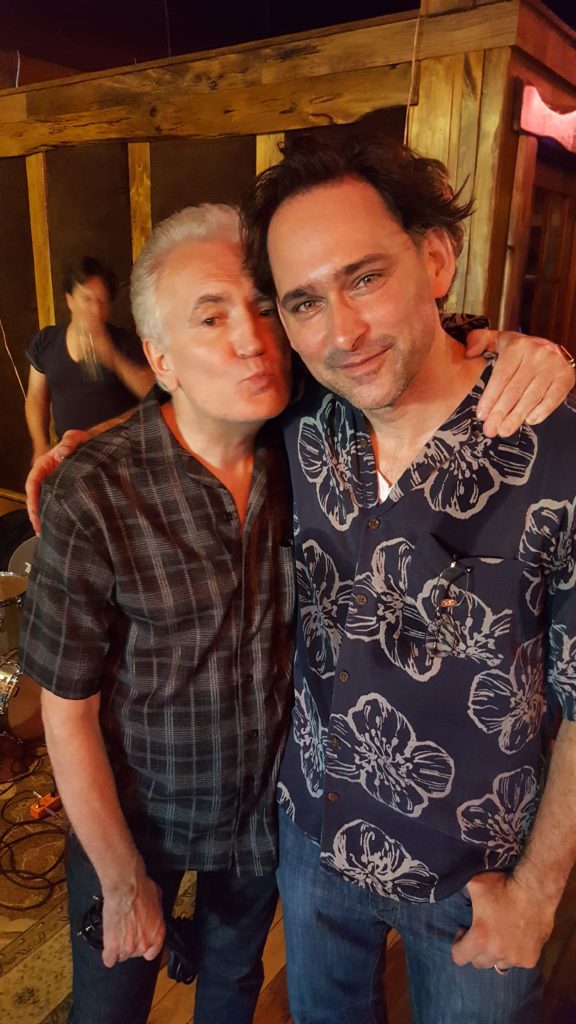 2017, MILWAUKEE, WI: Hanging with one of the greatest harp players I have ever heard (as well as a great songwriter), Jim Liban. I get to back him on guitar every so often. 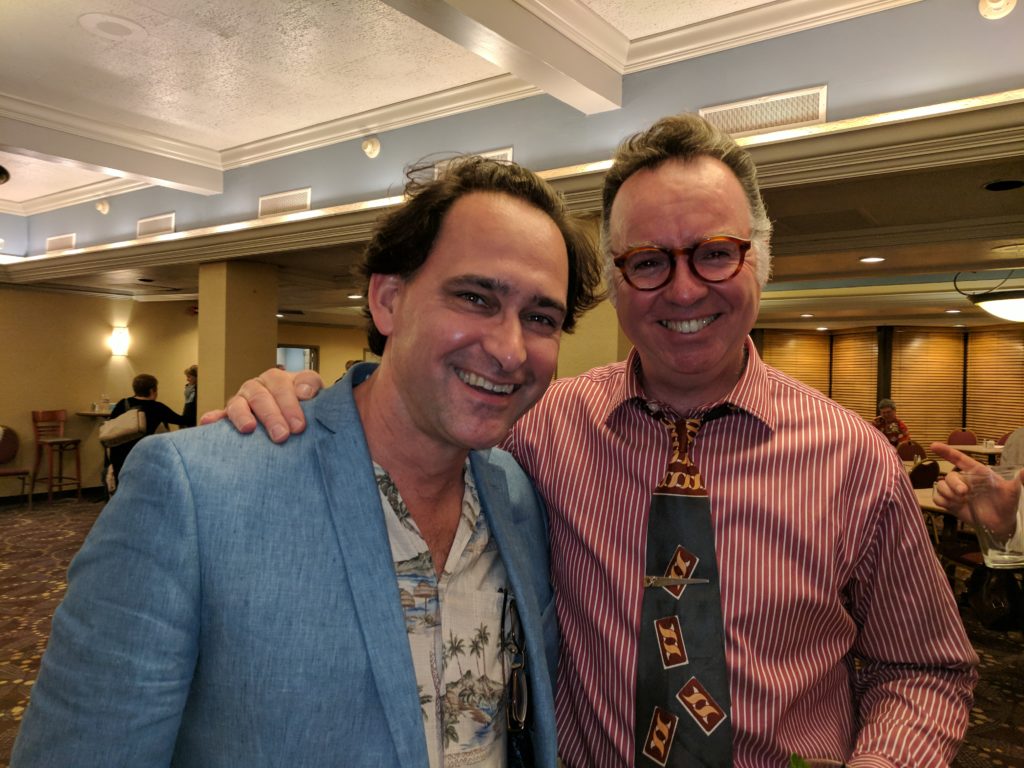 Hanging with the great Carl Sonny Leland at the Redwood Coast Music Festival in Eureka, CA. I played there with Aki Kumar and then the next day with Delmark label mate Steve Freund. 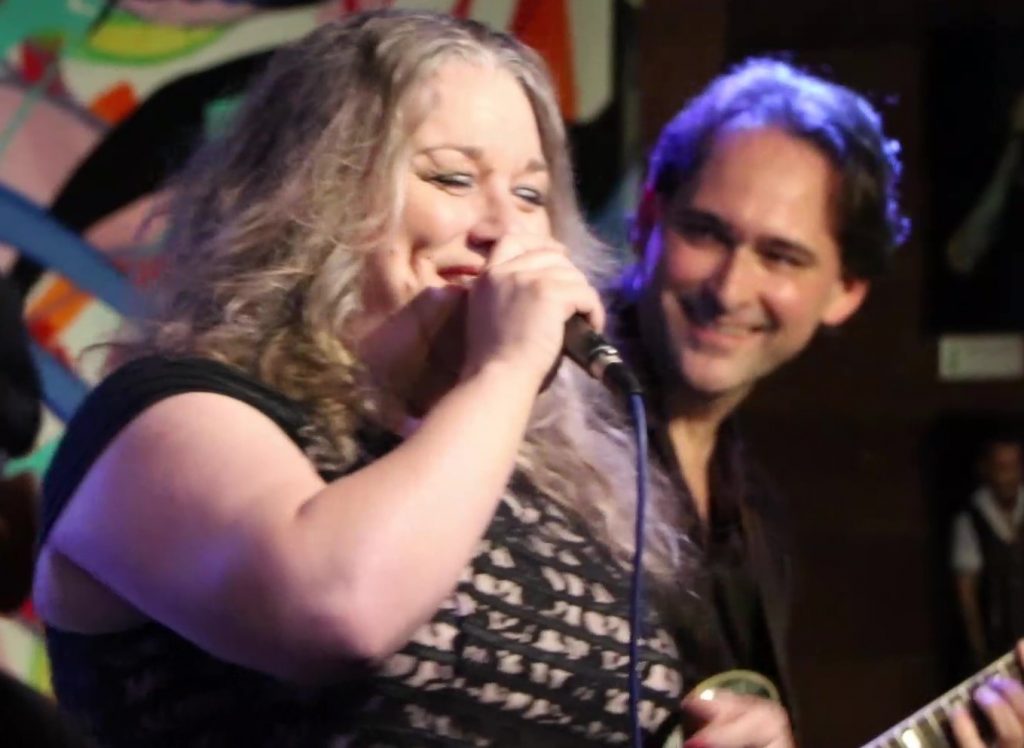 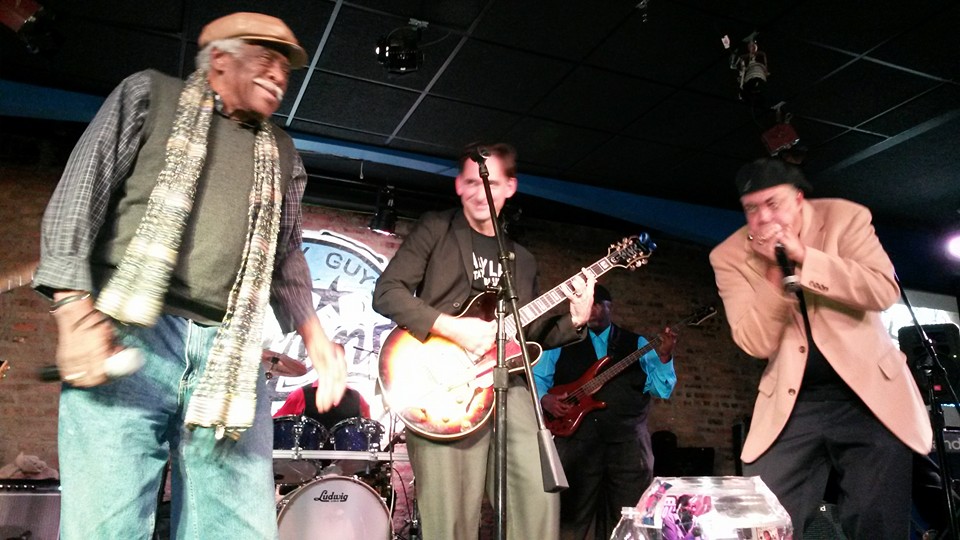 Happy memories in Chicago jamming at Buddy Guy's Legends with Eddie Shaw, Howlin' Wolf's longtime saxophonist and a star in his own right, and Billy Branch, one of the best harp players today. 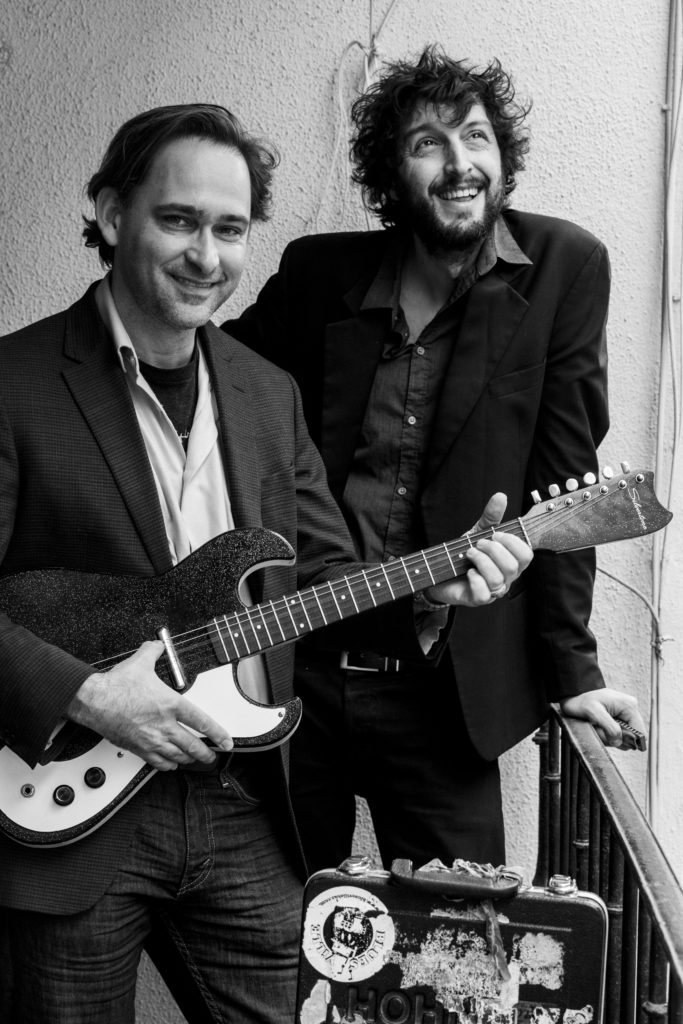 NOV 2016: This is the promo shot for me and Spanish harp player and singer Quique Gomez for a session we did in Toledo, Spain. We had to finish it up over a year later in Austin TX and that music became Dos Hombres Wanted, one of the best CDs I ever did. 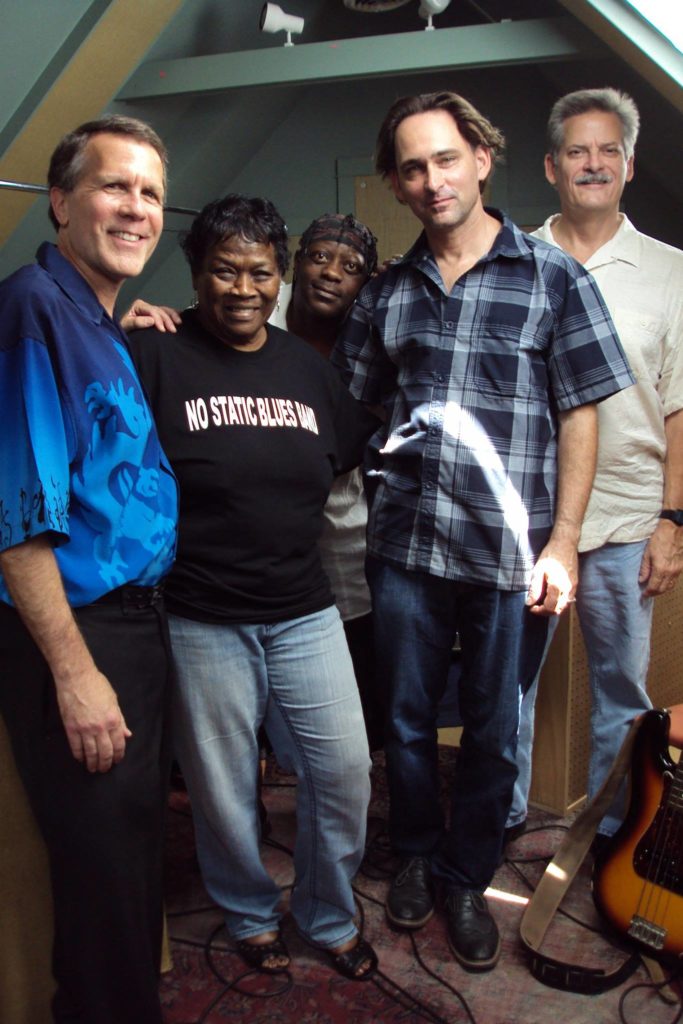 We all miss Mike Mettalia, who passed from ALS on 3.1.19. This was taken at the 2016 session for Chicago:The Blues Legends:Today. It was his dream to record a traditional blues CD in Chicago with some of the remaining blues masters, and I was fortunate enough to help make it a reality. From right: Mike Metallia, Mary Lane, bassist Jeffrey Labon, me and drummer Steve Dougherty at Hi Style Studio in Chicago. 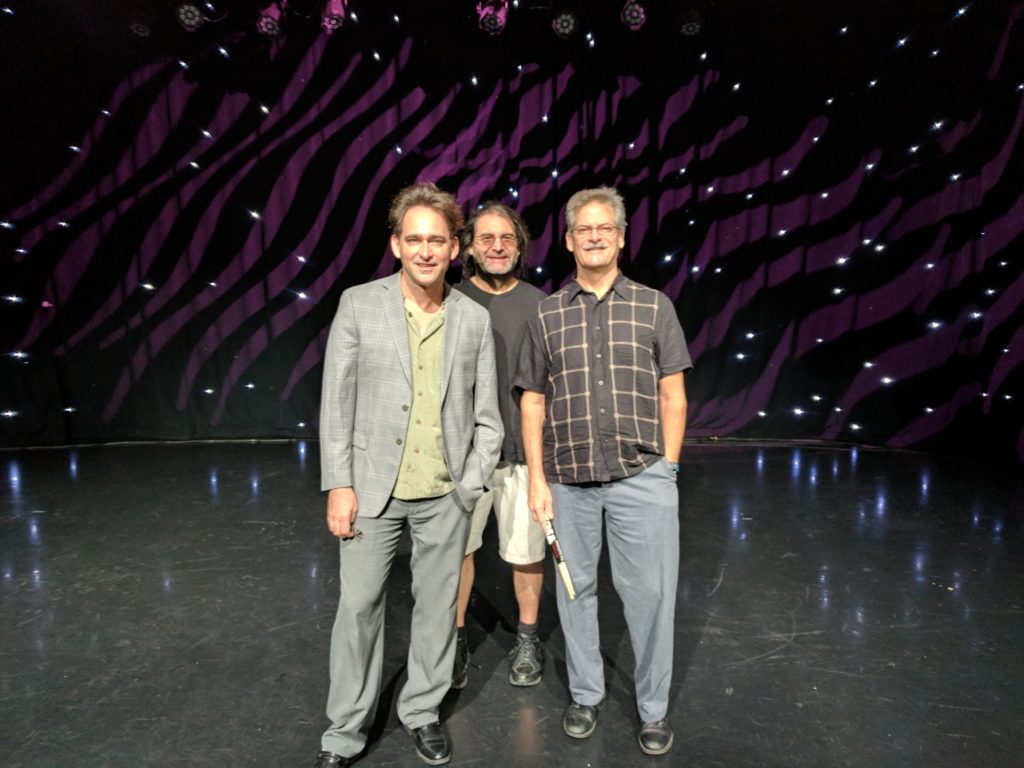 SEPT 2018, CHICAGO: The touring band of Chris Matheos and Steve Dougherty and I stopped by WGN TV studios to play on Midday Music Fix. 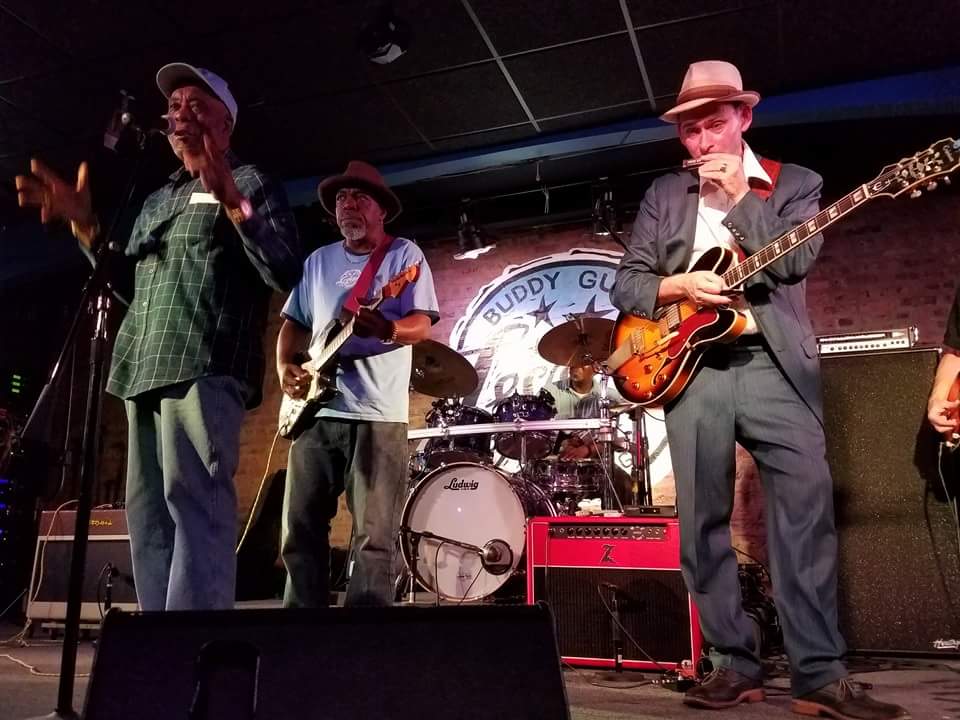 2016, CHICAGO: Buddy Guy and Lurrie Bell decided to sit in with my band that night. I switched to harp. Jeff Taylor, a wonderful South Side singer and drummer, is manning the drums and John Sefner was on bass. 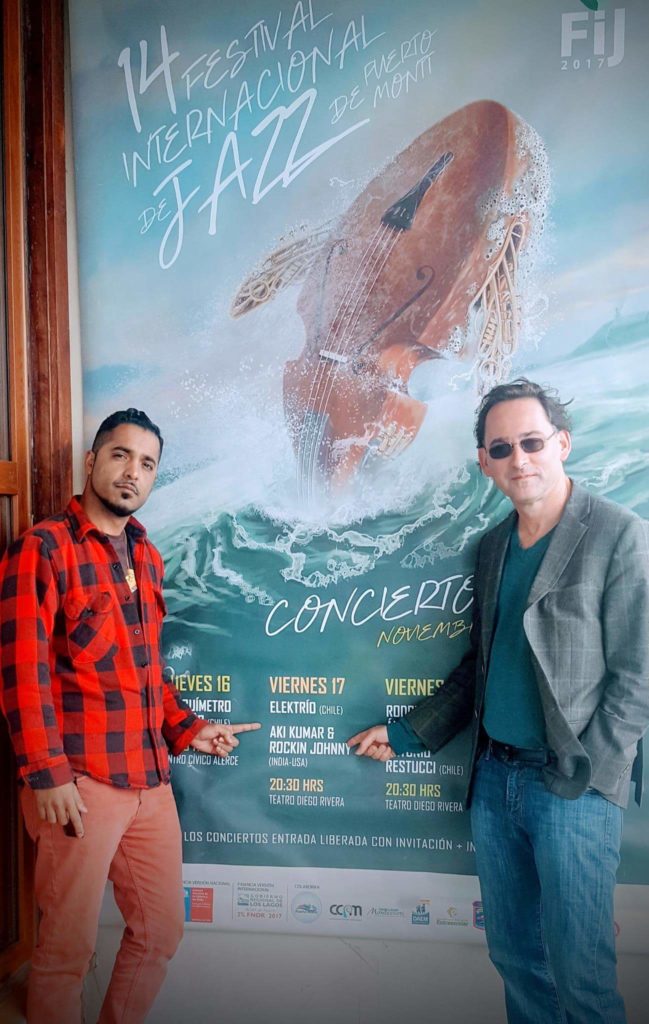 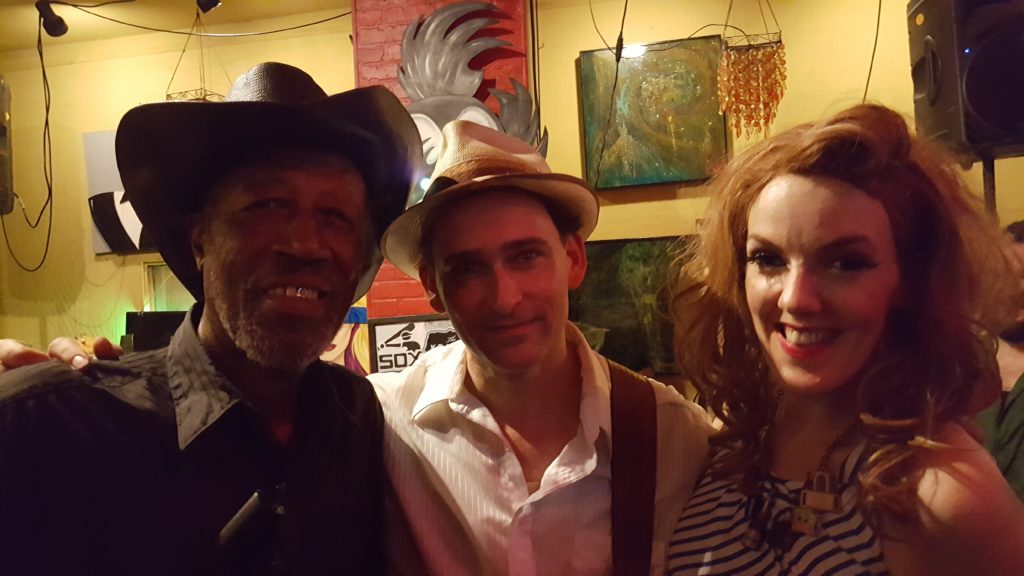 SEPT 2016, CHICAGO: The night of my going away party before I moved to the West Coast, I played with lots of my old friends including Tail Dragger, right, and burlesque dancer Red Hot Annie, left. I love backing burlesque dancers and one of my goals is to do an EP of new burlesque music. 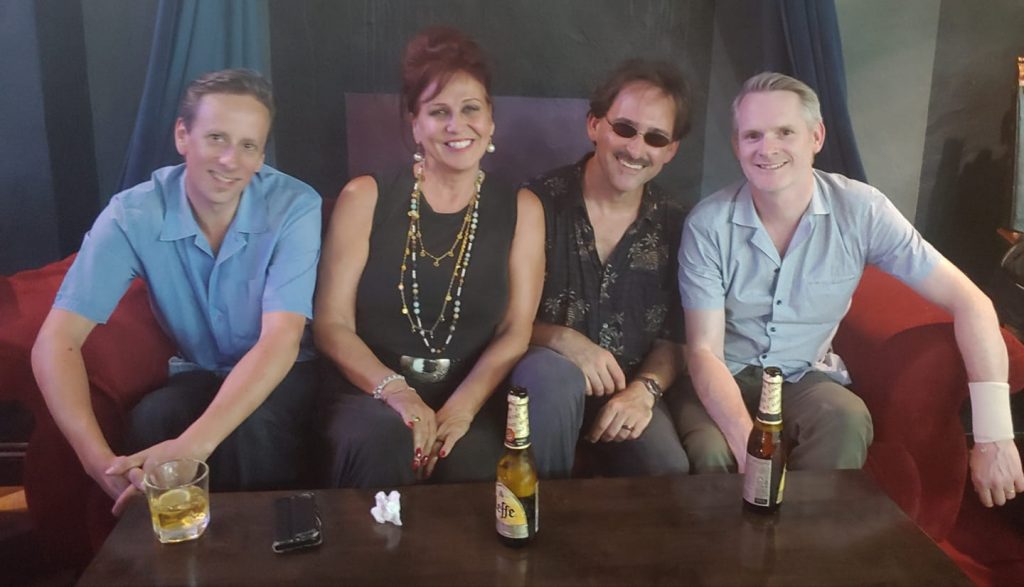 Folkestone, UK, Aug 2019. Peter Greatorex and Lewis Fielding did a great job of backing me on my last trip to the UK.